Evelyn was a vegetable seller...On one of her numerous trips in search of her livelihood, she was manhandled and molested by five hoodlums in the presence of her friends. How did it happen? National Mirror explains below: 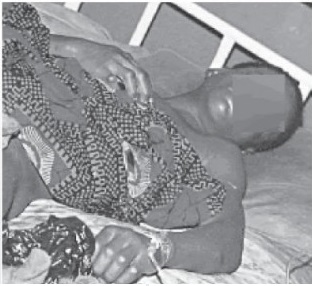 A five-man gang of robbers forcefully had canal knowledge of a vegetable seller simply identified as Evelyn. She was allegedly sexually assaulted in the presence of her two colleagues. Evelyn, a resident of Ojo area of Lagos State was at the back of a church along railways line, in Oyingbo area. It is the practice of those in that trade to pass the night at an open space in the area, while waiting for the trucks that convey the commodity from other states in the country. The purpose was to get the freshest of vegetables to sell the following day.

Evelyn, 28, who had reportedly been in the trade in the last five years, usually joins her colleague in the vigil waiting for the trucks.

In the early hours of Tuesday, April 2, 2013, Evelyn, as usual was among the horde of traders waiting for the truck bringing vegetable into the market. That day, the truck delayed a bit. Around 12:30a.m, Evelyn told two of her colleagues that she wanted to have a stroll down the sparsely busied street, hoping to have something to eat. The two friends reportedly joined her. The three traders trekked some five minutes down the railway line and they came to the kiosk where fried breads and eggs are sold. The kiosk was owned and manned by a Hausa trader.

The three women therefore settled down at the grocer’s kiosk and ordered for food to be taken back to their temporary abode. While the grocer was busy frying the eggs, the suspected robbers/rapists stormed the kiosk, launched an attack on the man.

The bread seller was reportedly beaten to a stupor by two of the robbers while the three of them swooped on the three women. While two of the women managed to wriggle out from the claws of the suspected robbers, Evelyn was not as lucky for she was reportedly haggling with the grocer over the price of meal in the innermost part of the shop when the hoodlums struck.

It was reported that the five men dragged Evelyn out of the shop and whisked her to a corner close by and where they took turn to rape her while the bread seller wriggled in pain on the floor of his kiosk. In the end, the grocer was reportedly robbed of a lot of cash and mobile telephone sets.

The two women also lost their GSM handsets while Evelyn also reportedly lost some money to the robbers. But rescue came the way of the molested woman when her two friends who raced out of the place ran to Denton Police Station to lodge a complaint of what had just happened.

Evelyn managed to narrate her ordeal in the hands of the rapists thus:

I have never experienced this in my life. Two of my colleagues and I, while waiting for the truck to bring the vegetable were hungry and decided to take a walk down the railway line, knowing it is always a beehive of activities at that time of the day.

While we were there waiting for the Mallam to fry the egg, we just saw these men walked in and we thought they also wanted to buy something. The next thing we saw was that they started beating the Mallam while some of them dashed towards me and grabbed me.

My other colleagues were lucky to flee the scene but because I was negotiating with the Mallam right inside the kiosk, I was not so lucky. That was how the men dragged me with them and carried me to one corner and molested me.

Speaking on the development, Agbodemu Ishola Musbau, a community leader and head of the vigilance group that apprehended the rapists, claimed that the rapists/robbers were members of the notorious gang that has been terrorising the community in the past couple of weeks.

National Mirror could not get the comment of the Denton Police Station as its Divisional Police Officer was said to be away while none of his subordinates was ready to speak with the press.
Posted by femmyoju at 13:40 2 comments: Links to this post