The hotel in Onitsha where 2 human heads were allegedly discovered

The hotel in Onitsha where 2 human heads were allegedly discovered 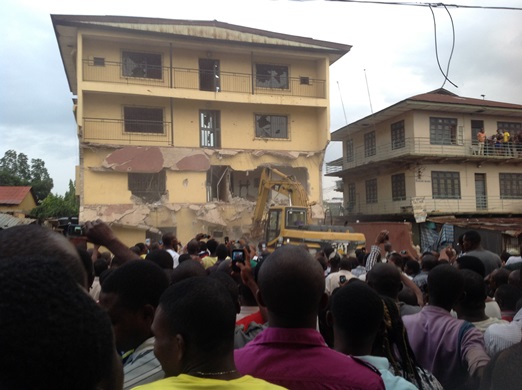 This is the popular hotel in Onitsha that was demolished by the Anambra State government last week after two human skulls were allegedly discovered inside. The hotel, called Upper Class Hotel, is located at 8 Old Market Road, Onitsha and is owned by business man, Mr Bonaventure Mokwe.

The human skulls, a male and a female head, were discovered after the Nigerian police raided the hotel following a tip off. Mr Mokwe has been arrested along with 10 other people. Continue... 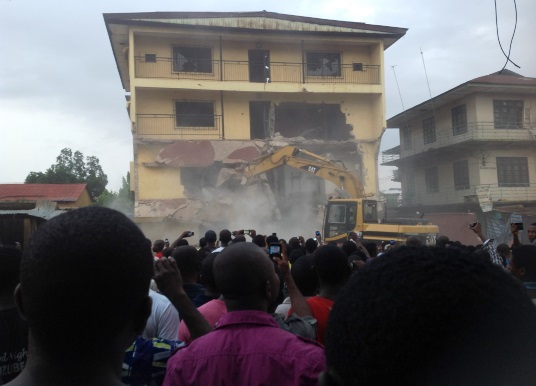 His wife, Mrs Nkiru Mokwe, a lawyer, has appealed to president Jonathan to save her husband's life claiming he was set up. She said the whole thing was a set up and the human heads planted in the hotel by people who wanted to destroy her husband.

“My husband is being detained in a very dehumanising condition at SARS, Awkuzu, and the police have denied him access to his lawyer and relations." She said "My husband’s hotel at No 8, Old Market Road, Onitsha which he inherited from his father, Chief G.C Mokwe, has been demolished"

She said her husband was a real estate magnate and there were lots of conflicts over ownership of lands between him and some people which led to his attempted assassination in 2009. She also alleged that the state government was planning to demolish other properties belonging to Mr Mokwe and begged for intervention.
Posted by femmyoju at 13:14