Mixed reactions have trailed the just concluded World Muslimah Beauty Pageant organized for the Islamic womenfolk as a suitable option to the glamorous Miss World beauty pageant. The pageant which held in Jakatar, Indonesia last week, saw young Nigerian University of Lagos student, Aisha Ajibola Olabiyi, clinch the winning title, with a cash prize of $2,200 and a trip to Mecca.

Muslim women and scholars have reacted to the pageant. Some feel the pageant violated the Islamic rule on women, while others say it's a welcome development. See their reactions after the cut...

Islamic activist, Professor Lakin Akintola released a press statement commending the organizers of the pageant as well as felicitating with the winner. Professor Akintola said:

"We align with the contest in view of the fact that the criteria were not indecent exposure and provocative postures. The contestants were tested in the areas of recitation of the Glorious Qur'an, Islamic biography, Islamic jurisprudence and current affairs. The event has also proved beyond reasonable doubt that Islam doesn't repress its women neither does it push them to the background. The event has added another feather to the cap of Nigeria and the African continent as a whole.

However some other scholars have expressed their opinions against the pageant saying "Muslimah beauty is for the husband to see not the world."

Regardless of the goodness the organizers claim they are trying to achieve with it, the means is totally unlawful and both the end and the means must be justifiable by Islam. finally the prophet made it clear when he said "Whoever copies a group is part of them"

"We cant commend such act because it is not part of our religion. Our niqab (veil) is not for beauty contest. It is for modesty. Hijab is our epitome of honor and should be treated as such. It should not be used for a dog-to-play thing and we must know that because some people are doing it doesn't mean we should do it. Remember what our prophet said, anyone that behaves like them is one of them.

"May Allah help Eka Ashanti, the Indonesian chief organizer of the contest to quick repentance".

A scholar for the pageant said:

"It is a good initiative but I don't support the word 'beauty contest' because there's nothing like that in Islam. They should have tagged it 'The World Quranic Competition or something else instead of pageant"

Aisha Zarumi described the pageant as a sinful act in the sight of Allah. She said

"It is madness of the highest order. Innovation is spreading everywhere. End time is near and the future of our kids is at stake. It is a horrible act, very shameful"

"It is not what you contest for, simply because others are doing it. Do we really have to follow Christians in everything they do, even when it leads to doom? This is un-Islamic. We are described as the best ummah, so we are meant to be imitated, not imitating or copying people ignorantly." 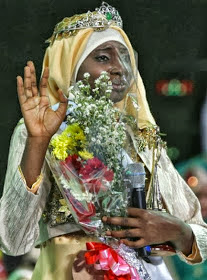