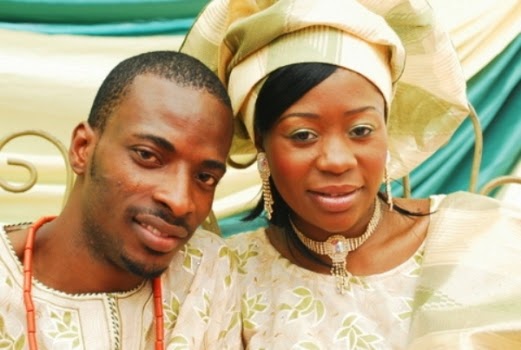 Four years after her 2010 separation from singer 9ice amidst cheating rumours, publicist and spoken word artist Toni Payne has finally addressed the rumours that has followed her for years. Toni & 9ice got married on July 17th 2008 and by January 2010, a year and a half later, the marriage was over. There were several reports at the time that she was caught cheating. 9ice actually started the cheating rumours by making a song where he said his woman cheated on him with a friend. People assumed he was referring to his wife and a rapper friend, who he later seriously quarreled with in the media

In a post on her blog yesterday, Toni said she never cheated on her ex-husband. Her words below...


To those who still believe I cheated on my ex. I am sorry to disappoint you, I never cheated on my ex hubby. Its not who I am, it will never be who I am. Tell yourself 1 million times, Toni Payne cheated, it will never make it true. Nobody caught me in any lie, or in any bad situation, nobody slept with anyone he was close to. Yall need to put a full stop to that bullshit. Its old!. Sometimes, men want their freedom, and the fact is you cant force them to stay. Same goes for women. Everyone wont have a perfect relationship, not everyone will stay married forever, we can only aspire to. Even those that have been married 10 years and are busy judging others, do you know your tomorrow? naaaa you sure don’t so curb it abeg. We can only pray, work, and hope for a good union. Continue...


Anyways To address this my ex said this or that issue. Let me just say He has NEVER for once opened his mouth to accuse me of cheating. He has NEVER for once opened his mouth to accuse me of sleeping with anyone he knows. If awon alaiye baje wanna use our situation then to sell their crap, how is that my fault? The same media controlling the remote to say I think cheating is ok, are the same who controlled the remote back then to say his song was about me. Nobody ever called him to verify or ask before publishing. Ill admit that we both did not handle the situation well back then, It was the first time we would experience such. The tension was plenty and emotions were everywhere. We should have sorted it privately. which we did try to do but one rubbish headline and emotions go buckwild again. I don’t wanna sounding like I am defending him, cos he is responsible for himself, but in all fairness to him, and because I have a conscience that serves me well, not for once did he tweet, fb, email, interview anything of the sort. Our issues had absolutely nothing to do with what the media were speculating. People took a song he did and turned it upside down. My crew MIXED AND MASTERED the song. If it was about me, why would I allow him release it. God gave all of us sense naa.. Some just chose not to use theirs and chose to believe anything they read even when the facts are there to sort through.

The only thing I have blamed him for, was not coming out on time to refute the claims and allowing it to escalate to that level, he has since apologized SEVERALLY, we have discussed it privately as we should have from the jump. I have accepted and moved on. I have also apologized for losing my cool on twitter, he has since accepted and moved on. Really, what more is there. I am not sure what people want from me. Should I hate him forever? Should I tie him to a post and flog him mercilessly? Should I be a wicked person and deprive him of his son? If I remain bitter and upset, please what value will it add to my life? Wo, my life is much more simpler than all this. Those who know me well, know this. Those that dont understand me are the ones who will be forever outside looking in, speculating crap. I am truly tired of this topic but since it seems to keep popping up, i felt it is best to finally address it properly. If anyone decides to hang on to the lie after this, that is their own cup of tea. I have a talk show to record, poetry to write and a child to raise. I don talk my own. FIN!.
Posted by femmyoju at 13:14 No comments:

Kanye West settles man he beat up in Beverly Hills with $250,000 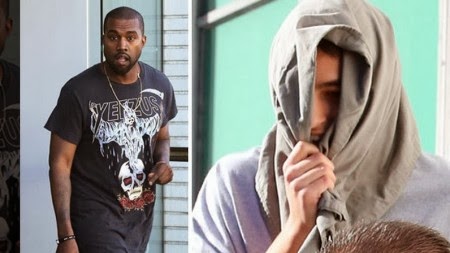 You get rough handled by Kanye West and receive $250,000 (N40m). According to TMZ, Kanye has settled the man he beat up in the waiting room of a Beverly Hills chiropractor with more than $250k.


The young man who allegedly hurled racial epithets at Kim earlier this month has agreed to the civil settlement and now feels satisfied enough that he does not want to go forward with a criminal prosecution. Law enforcement sources tell us ... the D.A. has not decided whether to charge Kanye with battery. The reality is ... there's almost no chance of that happening.  First, the D.A. now has an uncooperative victim. Second, the victim's alleged racial epithets will not sit well with the jury. And there are probably lots of Kanye fans in the jury pool. We're told during the settlement negotiations the victim's demand soared to the upper 6 figures, so $250K is just a fraction.We called Kanye's civil lawyer, Shawn Holley for comment ... but we got nothin'.Nevertheless ... we're calling it case closed." TMZ reports

Posted by femmyoju at 13:09 No comments: 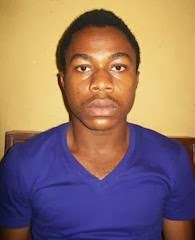 A Nigerian undergraduate student who used his tuition fee to buy hard drug has been arrested for drug trafficking, the National Drug Law Enforcement Agency said in a statement on Saturday.

NDLEA said the suspect, Udiomeh Kufre Ita, a student of the faculty of Management Sciences at the Regent University in Ghana, was arrested at the weekend at the Murtala Muhammed International Airport in Lagos. He was caught with 1.745 kilogrammes of dried weeds that tested positive for cannabis popularly called hemp.

The suspect was found in possession of the drug during the inward screening of passengers on an Africa World Airlines flight from Accra, Ghana, said NDLEA Lagos Airport Commander, Hamza Umar. Continue...

"An undergraduate student was found in possession of two parcels of cannabis weighing 1.745kg during routine search of passengers. The drug was hidden inside his bag containing personal effects. He was immediately arrested and the case is under investigation,” Hamza was quoted as saying.
“The suspect who reportedly gained admission into the faculty of Management Sciences at the Regent University is currently assisting narcotic investigators assigned to the case,” NDLEA said in a statement signed by its spokesperson, Mitchell Ofoyeju.

In his confessional statement, Ita was quoted as saying that he used his tuition fees in purchasing the drug found on him.

“I spent my school fees on cell phone, smoking hemp and attending night clubs. I bought a cell phone for N107,000 and spent my school fees recklessly. I thought I could make enough profit from the sale of cannabis to offset the deficit in my tuition. I bought each parcel of hemp for 220 Ghana cedi. I did not know what came over me and I am afraid to go to my parents. My father is a retiree,” the suspect was quoted as saying.

Source: PM News
Posted by femmyoju at 19:43 No comments: 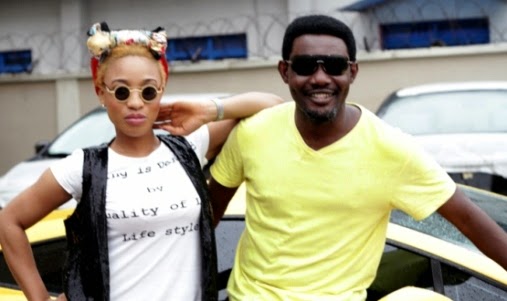 Tonto and AY are good friends. She's even done a few skits for AY comedy shows but last night the two friends went for each other, well more like Tonto went for AY.

Trouble started after the comedian re-posted a link to a story on his blog which was an earlier post about Tonto's look at the Calabar Carnival in December 2013. Tonto felt he was making fun of her and went for the jugular. See more tweets after the cut.. 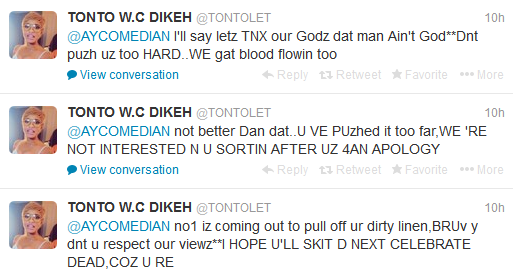 AY apologized and took the post down but Tonto wasn't having any of that... 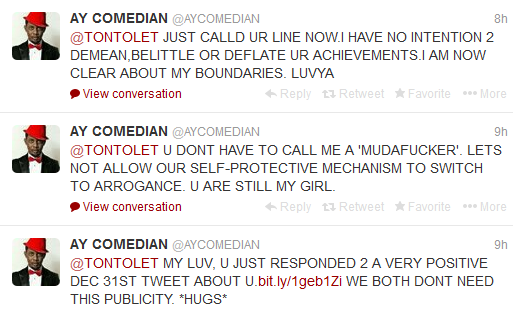 Posted by femmyoju at 13:11 No comments: 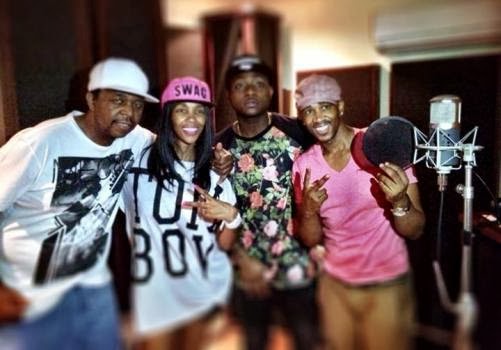 South African singer and producer Oskido revealed on twitter yesterday that Mafikizolo, the South African singing group behind hit song, Khona are working on a musical collaboration with Nigerian music sensation Davido. He didn't reveal the name of the song which is being recorded in SA but he hinted that its being produced by Davido's music producer, Shizzi. c More pics after the cut... 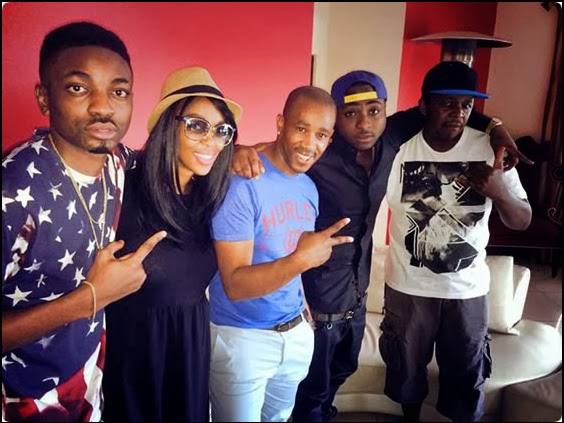 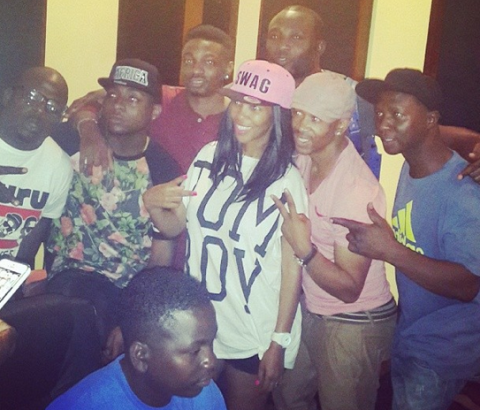 Posted by femmyoju at 00:07 No comments: 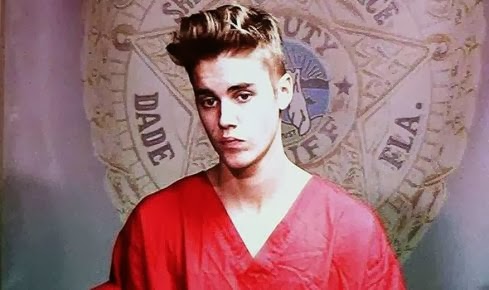 TMZ reports that Miami police claim that Justin Bieber was drag racing and driving under the influence when he was arrested on Thursday morning doesn't hold water. TMZ report below...


Miami Beach cops claim Justin Bieber was drag racing at the time of his arrest Thursday ... but the facts seem to show the allegation is made up ... because we've learned they were actually under the speed limit in the middle of the so-called drag race.

According to the police report ... cops spotted Justin and his buddy Khalil drag racing at around 4 AM. The police report says ... an officer observed the 2 vehicles reaching speeds between 55 and 60 MPH.

Now the problems. Cops say they noticed the "drag race" on the 2600 block of Pine Tree Drive. Cops were traveling in the opposite direction so they made a U turn and pursued the cars for 15 blocks. Continue...

Mind you ... Justin was driving one of the fastest race cars around -- a Lamborghini Gallardo LP550-2 Spyder.  Khalil was driving a Ferrari 16M.  Cops claim 2 SUVs in Justin's entourage actually blocked off traffic to give the 2 a clear path.

So how could a 15-block drag race in those cars reach speeds of ONLY 60 MPH?

TMZ has learned ... the place where Justin and Khalil rented the cars attached a GPS device that also tracks speed.

There's only one time they ever broke 50 MPH and that was long before the pursuit started.  When Justin and Khalil left the club, one car was briefly clocked at 52 MPH and the other 47 MPH. Both drivers slowed down pretty quick and 5 blocks before cops noticed them they were going 34 MPH in a 30 MPH zone.   Blocks later, they were steady at 27 MPH.

So it seems cops goosed the facts to justify the stop.

And that's not the only problem with the police report. TMZ broke the story ... Justin's blood alcohol level was .014 -- a barely measurable amount. Yet cops claim Justin reeked of alcohol both at the scene and at the police department.
Posted by femmyoju at 00:03 No comments: 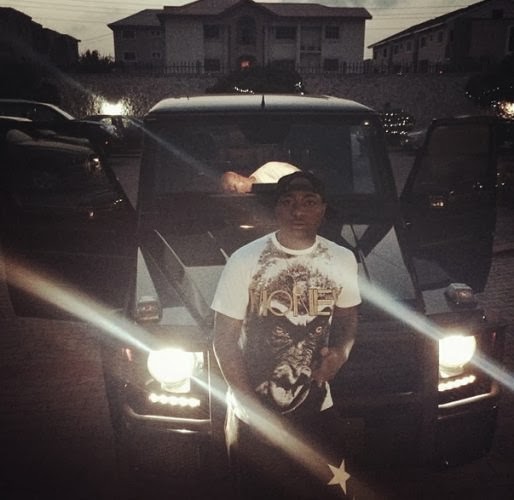 That's the 2013 Mercedes Benz G Wagon said to be worth over N30million. Another pic after the cut... 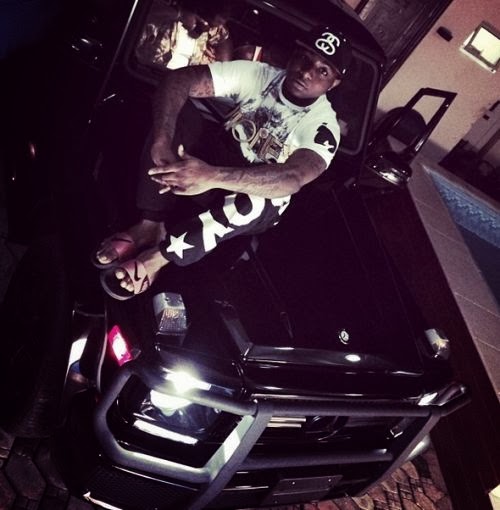 Posted by femmyoju at 03:06 No comments: