According to MTO, Kim K secretly visited a divorce lawyer 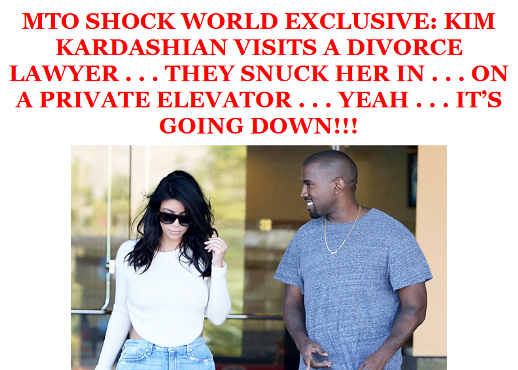 MediaTakeOut and their blockbuster exclusive reports..lol. They're now claiming that Kim K secretly visited a divorce lawyer in LA this week. Read their report below...


"MediaTakeOut.com just got crazy news - on the heels of Kim Kardashian's latest nude pic scandal. According to a person who works security at 2029 - Kim Kardashian visited top divorce lawyer Laura Wasser at her office earlier this week.

According to our snitch, who works as security for another company in the building, Kim arrived on Tuesday afternoon, just hours before her nekkid pics were released. The insider explained, "Kim drove into the building and they shut down a special elevator for her to go upstairs to the lawyers office."

It's not clear what business Kim had with the firm where TOP DIVORCE LAWYER Laura Wasser works - or why she was being so SECRETIVE about the meeting. You'll recall that Laura represented Kim in her divorce with Kris Humphries.

We'd bet she's gonna hit Kanye with that PAPERWORK real quick . . . she got all she needed out of their relationship. Now it's ON TO THE NEXT ONE . . .