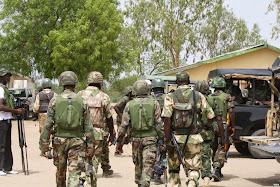 Colonel Popoola had led a team of soldiers drafted from Jos in a battle to reclaim the cities when he was shot in the shoulder. An army source said he has been transferred from the military hospital in Adamawa to the University College Hospital Ibadan where he will receive better treatment.

The four soldiers alongside one Captain Lawan were arrested yesterday and locked up inside the military police guardroom at the 23rd Brigade in Yola Adamawa state.
Posted by femmyoju at 17:53