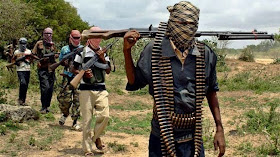 Many people are feared dead after Boko Haram members attacked Shani local government in Borno state around 9pm yesterday night Nov 29th. A residents of the village said the sect members arrived their community on 10 motorcycles and immediately started shooting at people

"They came in about 10 motorcycles from Gwaskara axis well armed with Ak47 rifles Improvised Explosive Devices and petrol bombs wrecking havoc without confrontation as there were no military operatives or police to assist the armless civilians who were running helter-skelter for their dear lives. As I speak to you now, I left my people running towards Pakaina village for safety. It is only God that will know what is happening with the sporadic gunshots that engulfed the entire council area,” Mallam Babayo Ardo, a resident of the town told our National Mirror on phone.

This will be the third time the sect mebers are attacking Shani community
Posted by femmyoju at 18:25