A Federal High court sitting in Lagos this morning discharged& acquitted former Aviation Minister, Femi Fani-Kayode of 38 out of the 40 amended count charge of money laundering brought against him by the EFCC in 2008.

Delivering her judgement, the presiding judge, Justice Rita Ofili Ajumogobia, said that EFCC had not provided any evidence that proved that the former minister had in anyway laundered money through fictitious business transactions. According to her, the prosecution had failed woefully in proving that he was guilt in all the 38 count charge brought against him.

She went further to say that all the witnesses provided by the prosecution since the trial started had not provided any evidence to prove that the former Minister had any business dealings with them.

Consequently she discharged and acquitted him of 38 count charges but however instructed him to enter a defence against the two other charges counts. The case was adjourned till December 8th. 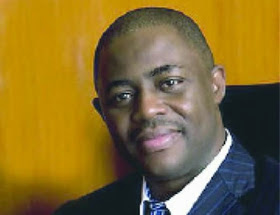