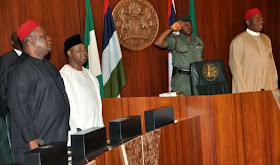 The Federal Executive Council yesterday approved the purchase of N9.2bn worth of cooking stoves and ‘wonder bags’ for rural women under the National Clean Cooking Scheme.

Speaking with state house correspondence after the FEC meeting, the Supervising Minister of Information, Dr. Nurudeen Muhammed said the scheme which is a federal government initiative, is geared towards reducing the use of firewood among rural women in Nigeria.

"The National Clean Cooking Scheme is an aggressive drive to engender clean cooking culture amongst the poor rural women, to reduce and possibly eliminate cooking with solid fossil which is detrimental to health. The scheme is expected to provide 20 million clean stoves over a five-year period at the rate of four million stoves per annum, which will be distributed free of charge. It will also reduce incessant felling of trees, which exposes the country to ecological problems” he said.


The Minister said N9.2bn, inclusive of Value Added Tax, was approved for the procurement of 750,000 units of clean cooking stoves and 18,000 wonder bags, a non-electric slow cooker invented by Sarah Collins, a South African eco-entrepreneur, who came up with the idea of surrounding the pan with cushions six years ago during a power cut in her country.

He said the stoves were expected to be delivered by Messrs Integra Renewable Energy Services Limited within a period of 12 weeks.

Minister of Environment Mrs. Lawrecia Mallam who also spoke on the initiative, said the government decided to purchase the cooking stoves for the rural women because it considers cooking with firewood a silent killer.
Posted by femmyoju at 18:22