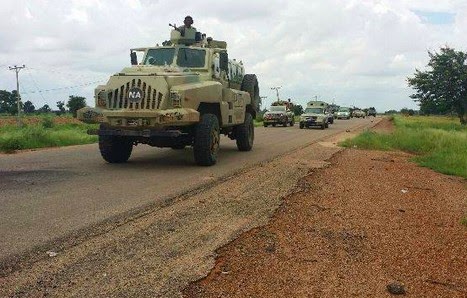 Boko Haram insurgents have fled from Mubi town in Adamawa state after the military and hunters engaged them in a fierce battled near the town from the beginning of this week. A resident told Daily Trust that the insurgents withdrew completely from Mubi ‎around 2pm on Monday after suffering serial defeats in Maiha and Mubi.

"Around 2 pm on Monday, the insurgents asked us to get in to our houses because they were coming to attack the town. Later, we discovered that it was a trick for them to flee the town without us knowing," the resident said.

The residents said security forces camped at the barracks in the outskirts of Mubi around 4 pm on Tuesday, firing warning shots in the air and chanting war songs before moving to the heart of the town Wednesday.

‎"The good news is that our people have pushed the insurgents out of Mubi after the troops working on the side of Gombi pushed them out of the area. There is synergy between the military and the vigilante and hunters," he said.

He said government is supporting security agencies and local vigilante to help restore security in the state.
Posted by femmyoju at 10:34