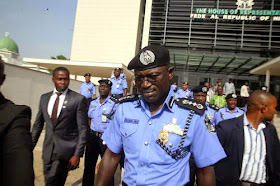 House Committee Members this afternoon walked out on the Inspector general of police, Sulaiman Abba, after he refused to address Speaker Aminu Tambuwal properly when he appeared before the House of Representatives Police Committee today after several days of ignoring their invitation

According to Sahara Reporters; while trying to explain why his men invaded the National Assembly last week, the IGP said 'they had credible intelligence that some thugs had planned on causing mayhem at the resumed sitting of the house."

Now here's where it gets interesting...lol. The IGP said 'one Alhaji Aminu Tambuwal led a group of thugs to overpower the security at the first gate. A move he claimed led the police to lock down the second gate and fire a canister of teargas.

His reference to the “Speaker of the House as “one Alhaji Tambuwal” made the committee members mad. Continue...


They asked the IGP to properly address the speaker of the house according to protocol but Mr Abba said the case of the speaker was in court and as such he wouldn’t like to comment further on it.

The committee member refused to proceed with the hearing until the IGP properly addressed the speaker. They said as long as he refuses to do so,  they too would no longer recognize him as IG. They argued back and forth and the members walked out on the IGP.