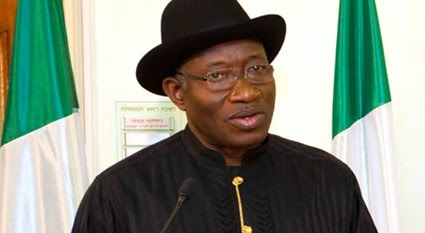 So leaders in government now score themselves high, rather than allow the people judge them? That is our country for you. President Goodluck Jonathan has described himself as Nigeria's best leader ever.

The President said no leader since the country gained independence in 1960 had done better than himself for the country. He, therefore, said comments made by President Olusegun Obasanjo, in which the ex-President described Jonathan’s performance as below average, was untrue.

“Our attention has been drawn to comments made by a former President of this country, Chief Olusegun Obasanjo, regarding the performance of the administration of President Goodluck Jonathan.

“Obasanjo had at an event over the weekend declared that he rated the President Goodluck Jonathan administration ‘below average’.

“We aver that Obasanjo’s comments are untrue, misleading and clearly do not tally with the facts on the ground...


“We therefore wish to assert without equivocation that in terms of performance and achievements, no administration since 1960 when Nigeria gained independence from Britain, has done as much as that of President Jonathan.”

Jonathan said this in a statement by his Special Assistant on Public Affairs, Doyin Okupe, in Abuja.

He said that every discerning and unbiased Nigerian would definitely attest to this “as the evidence stare all of us in the face.”

Okupe, who had also worked with the former President while in office, added that contrary to Obasanjo’s position, the Federal Government under Jonathan had performed excellently given the prevailing circumstances and resources available to it.

He said while it was true that Nigeria had been faced with incidents of insurgency and terrorism, especially in the last few years, the Jonathan administration had successfully contained the initial widespread activities of the insurgents, which he said were prevalent in 12 states of the North, including the Federal Capital Territory.

He added, “While it is true that the present activities of the terrorists in the three north-eastern states have become more deadly in mindless killings, kidnappings and supposed territorial seizures, government has made giant diplomatic strides with our neighbouring countries in order to checkmate the crisscrossing of the insurgents.

“The military and other security agents, which have engaged the insurgents since inception, have done a great job in spite of recent challenges.

“The truth of the matter which we must know and accept is that we have an internal enemy supported by internal and external resources waging a major warfare against our nation.”

Obasanjo had stated that most Nigerians are not feeling the impact of the Jonathan administration.
Posted by femmyoju at 10:05