4 hours after Boko Haram men captured Chibok town in Borno state, soldiers from the 7th Division of the Nigerian army yesterday reclaimed the community after a long gun battle that started yesterday morning.

An indigene of Chibok who spoke withLeadership, said a large deployment of soldiers were seen moving in from the direction of Damboa on Saturday morning and engaged the sect members in a gun battle, eventually overpowering them.

“We saw large number of trucks filled with uniformed personnel moving towards Chibok; initially, we were scared but later realised they were soldiers as they did not harass us like the Boko Haram gunmen usually do” the source said

“We have taken back Chibok town from the insurgents after some few hours of engagement with them. We have since sent them parking from the town; it is now safe for people to return to their homes”. 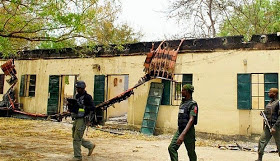