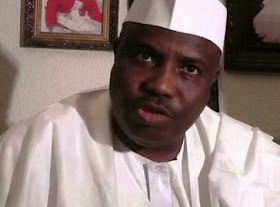 After the Speaker of the House of Reps, Rt. Hon. Aminu Tambuwal, dared the presidency to go ahead with the plan to arrest him, the office of the National Security Adviser (NSA) has denied news report in some media that NSA Sambo Dasuki has ordered the arrest of Tambuwal.

The director, Special Duties in the Office of the NSA, retired Colonel Bello Fadile said: “It is not only untrue and mere fabricated reports that the NSA met with the VP and ordered the arrest of Hon. Tambuwal, the fact is that the National Security Adviser, Sambo Dasuki has been outside the country since Wednesday on pressing national security issues.

“To the best of our knowledge, there is no order for the arrest of Hon Aminu Waziri Tambuwal, speaker of the House of Representatives.

“We therefore urge the media to always cross-check their stories before going to the press.”


Meanwhile, the spokesperson of the Nigeria Police Force, DCP Emmanuel Ojukwu has also denied that the Inspector General of police has issued any such arrest. He said: “It lies with the investigators to determine who should be quizzed and/or prosecuted, as the case may be for criminal acts.”
Posted by femmyoju at 10:03