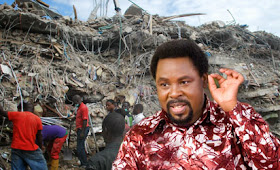 The founder of the Synagogue Church of All Nations, Prophet T.B. Joshua yesterday asked the Lagos state High Court in Ikeja to stop proceedings of the coroner inquest set up by the Lagos state govt to look into the circumstances that led to his church's building collapse on Sept. 12th which killed 116.

The coroner, Magistrate O.A. Komolafe however declined his request saying no one had served him court document to that effect.
Posted by femmyoju at 16:27