54 more soldiers sentenced to death by firing squad for mutiny 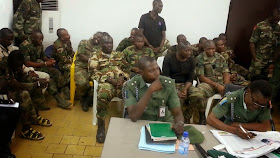 54 soldiers including two Corporals, nine Lance Corporals and 49 Private soldiers attached to the 7 Division Nigerian Army in Maiduguri Borno state have been sentenced to death by firing squad for mutiny by a court marshal that sat in Abuja today Wednesday December 17th. The soldiers were convicted on a a two-count charge of criminal conspiracy to commit mutiny.

According to the charge sheet, the soldiers conspired to commit mutiny against their superior at the 7 Division on August 4 at the Mulai Primary School camp, opposite AIT Maiduguri, Borno state.


Captain  J.E. Nwosu, an army Captain who is the prosecutor in the case, told the marshal panel that the accused soldiers had on August 4, in Maiduguri, refused to join the 111 Special Forces Battalion troops, commanded by Timothy Opurum, a Lieutenant Colonel for an operation which was meant to recapture Delwa, Bulabulin and Damboa in Borno State from members of Boko Haram.

Captain J.E Nwosu in his submission said the offence is punishable under Section 52(1) (a) of the Armed Forces Act Cap A20 Laws of the Federation of Nigeria, 2004.

The commander of the 111 Special Forces, Lt.-Col. Opurum, while testifying before the panel as a witness, said in the recapture operation, only 4 officers and 29 soldiers participated in that particular operation with other soldiers hesitant to participate.

This brings to 66 the number of soldiers sentenced to death for mutiny. Their sentencing however is to be ratified by senior military authorities.