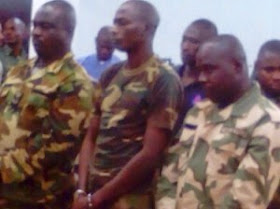 54 soldiers sentenced to death for mutiny by a military court  in Abuja last Wednesday Dec.17th, are reportedly being starved of food and basic care, a military source told Premium Times

The soldiers, who were transferred from Abuja to Lagos on Sunday December 21st, are said to be serially shackled by their legs and crammed in two cells without beds or food or any form of care..

“The first cell has 30 soldiers. The second is underground and has 24 soldiers. There are no beds, no mattresses. The soldiers have not been fed since Sunday.” the source said.

The soldiers have been in this condition since they arrived Lagos Sunday Dec. 21st till Wednesday December 24th but no one knows if their conditions have since improved.
Posted by femmyoju at 19:54