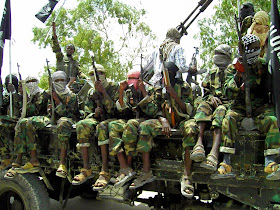 Barely 24 hours after suspected members of Boko Haram detonated two bombs at the Maiduguri Monday market killing more than 10 people, the sect members launched another attack on Konduga village in Borno state. The attack started in the early hours of today Dec 2nd.

The sect members had tried to invade this particular village in September but the Nigerian military had stopped them, killing 150 of their members. Konduga is about 35km away from Maiduguri, the state capital.
Posted by femmyoju at 10:12