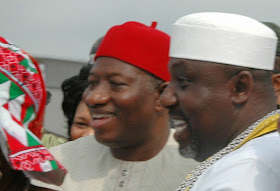 Governor of Imo state and a presidential aspirant of the APC, Chief Rochas Okorocha, says that the reign of terror by Boko Haram members in Nigeria will not stop if President Jonathan is re-elected President in 2015.

According to Sahara Reporters, Chief Okorocha said this in Akure Ondo state while campaigning for votes for the party's Presidential primaries which holds next week Wednesday December 10th

“If President Jonathan wins the forthcoming election Boko Haram would never stop and if PDP has what it takes to stop this carnage they would have done it a long time ago" he said.