Dr. M.K. Hassan Fires Back At PDP For Calling Buhari A Semi-Illiterate 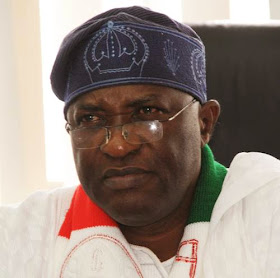 Prof. Wale Oladipo, PDP National Secretary
Dr. M.K, a Nigerian who resides in Washington D.C. has fired back at Professor Wale Oladipo, secretary of the People’s Democratic Party, for calling APC’s presidential candidate, Muhammadu Buhari a semi illiterate. Dr. M.K who sounded very furious in his write up has this to say;

On a lighter note, I am glad we are grown to witness these happenings in Nigeria now. I remember when all these ‘dramas’ were on years back, we had look aside and say, what are these people saying?. But then, see what we have been missing. May the right candidate win, lol. Too much to deal with! Chai…

I was shocked to read a press statement from Wadata Plaza issued by a so called Professor Wale Oladipo, secretary of the PDP, saying that General Muhammadu Buhari is a semi illiterate jackboot. It is no wonder that our education system has fallen so low, else how can one explain a professor making such a statement? How did Wale Oladipo become a professor to start with? It is quite astonishing that he can say this. The professor doesn’t seem to understand the basic rudiments of learning and what it means for one to be literate or not.

Buhari attended the best military schools in the world. In case the professor doesn’t know, Buhari graduated as a military officer (Lieutenant) in Royal Military Academy, Aldeshot UK. He attended the Defense College India. Col Buhari attended the US Army War College Carlisle in Pennsylvania from 1979 -1980 and earned his command as a Brigadier General. The respected General Collin Powel attended the same school in 1976 to become Brigadier General. Some of Buhari’s classmates include General Beltson, General Thomas P Carney, General Bill Matz, General David E.K. Cooper etc. all of them are alive and can be reached and they will give glowing tributes of the man, Buhari, they know as their classmate.

The curriculum at the U.S. Army War College earns one a Masters Degree in Strategic Studies and that is what Buhari has.

Anyone interested in verifying Buhari’s academic credentials can write the school instead of reading jargon from a deranged Wadata Plaza Professor of Politics of Destruction Party (PDP). I have checked Google Scholar hoping that Prof. Wale Oladipo’s name and publications will show up but nothing is showing up, that says a lot about him as a Professor than Buhari as a retired decorated General who served his country so well and has not claimed any scholarship.

For somebody to claim that a graduate of such a prestigious school is semi-illiterate, means something is very wrong with that person’s brain. By all academic and military standards, Buhari’s education is superb and the best any general can get in the world. Therefore, for Wale Oladipo to claim Buhari is semi-illiterate speaks volumes about his understanding of what education is even all about. The unlearned professor thinks education is about earning paper degrees only, and even if it was the case, Buhari has them from the most respected military institutions in the world.

General Muhammadu Buhari has the kind of military strategic education and experience to deal a decisive blow on Boko Haram and end the insecurity challenges facing Nigeria. Buhari is the only army officer with the opportunity to command 3 out of 4 Nigeria’s army divisions as a GOC.

In 1983, when rebels from Chad took over our land, seizing more than 19 villages (much like what the Boko Haram is doing now), Major General Buhari led a successful operation as the GOC to push back the Chadian rebels and reclaim our territory.

In 1984, when the Maitatsine sect decided to declare war on Nigeria like what Boko Haram is doing now, Head of State, Muhammadu Buhari wasted no time in crushing them. Boko Haram is a descendant of the Maitatsine sect with the same extremist ideology and anti-western education philosophy. It is surely President Buhari that will be able to handle them: eliminating these terrorists when he comes to power like he did before. Muhammadu Buhari as a captain fought in the Congo Civil War and won the Congo Medal. He was there during our civil war to bring peace and keep Nigeria one. That is true patriot: a man that gave his life to another country not only his fatherland.

Since the goons in Wadata Plaza have started the literacy debate, it is very appropriate to ask them that they produce Dr. Goodluck Jonathan’s Ph.D thesis and publications in renowned journals. Goodluck’s speeches, attitude, and interviews with international media don’t portray him as a Ph.D holder. His past interview with Christiane Amanpour was quite embarrassing; he couldn’t even make eye contact with her. Nigerians are eager to read his thesis and publications.

In conclusion, it is obvious to all Nigerians that the PDP government and its illiterate professor are only interested in playing dirty politics with the lives and properties of Nigerians. Nigerians now need Buhari, a man with international military education and experience, a seasoned administrator with zero tolerance for corruption to end this insecurity, bring prosperity, and place Nigeria at the seat it deserves in the comity of nations.

Dr. MK Hassan writes in from Washington D.C.
Posted by femmyoju at 14:21