Emir Sanusi replies Boko Haram: Nothing Will Happen To Me 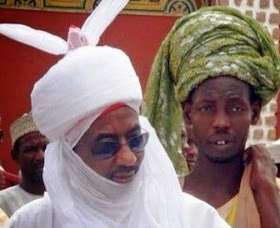 In what appears a direct reply to the Boko Haram leader, Shekau, the Emir of Kano, His Royal Highness, Muhammad Sanusi II, has declared that he remained protected against any evil attack and nothing is going to happen to him except it is the will of Allah, the creator.

This was disclosed during a Friday special prayer session held at the Kano City Central Mosque on Fruday. The Emir, Sanusi II, who presided over the special prayer, reiterated his earlier call on the general public to protect themselves against the attacks of the wicked Boko Haram sect.

The Emir declares: “I am protected and nothing is going to happen to me.”

On Shekau’s position on attacking religious groups, Emir Sanusi urged all Muslim faithful and the followers of Tijjaniyya, Qadiriyya and Izala religious movement to be vigilant and continue to guard themselves and rise against insurgent attacks.

He called on the people to be vigilant and protect their mosques, churches, markets and hospitals against any attack.

According to Emir Sanusi, it is rather unacceptable for people to abandon their daily deals or desert places of worship because of Boko Haram. He urged all not to succumb to fear but be their brothers’ keepers.
Posted by femmyoju at 08:52