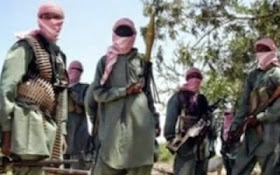 Gunmen, suspected to be members of Boko Haram, stormed Damaturu in the early hours of today and began shooting and bombing the city. The attack, which was ongoing as at 7.30am today, has seen residents of the town scampering for safety.

According to reports, the mobile Police base which is in the outskirts of the town has been burnt down and many state institutions have also been raided by the rampaging gunmen who are now reportedly advancing to the main town of Damaturu.

They have also attacked some schools, including the Yobe State University located in Damaturu. The students have taken to the bushes for safety. There are also reports the militants are advancing to the government house with the aim of taking it over. More details later
Posted by femmyoju at 08:44