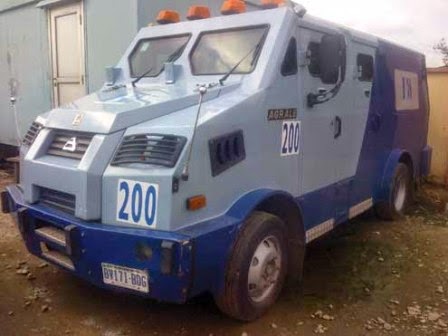 For leading an illegal duty, a Police Inspector and three other police officers are in soup in Ondo state Police Command.

The four police officers with two drivers and a cash officer are being detained and quizzed for embarking on an illegal duty by escorting a bullion van conveying an unspecified amount belonging to a new generation bank, penultimate Thursday, from one of its branches in Ondo town to its headquarters in Akure, when the hoodlums struck.

The two drivers drove the bullion van and the escort vehicle while the cash officer is a staff of one the bank.
Vanguard gathered that the suspects may have been embarking on such illegal duties before now to make brisk business until nemesis caught up with them.

It was also gathered that the four policemen who embarked on the illegal duty without official approval from the operation unit of the command, are currently being detained and interrogated for conspiracy in the robbery incident which took place at Elemoso village, Ondo East Local Government area of the state.

“On a good day, whenever banks want to convey money from one town to the other, they usually write to the operations unit of the state police command and eight policemen would be approved for them.”

However, only four policemen escorted the bullion van last Thursday, which fuelled suspicion of conspiracy. The State Police Commissioner, Isaac Eke confirmed that the command smells conspiracy as the policemen who escorted the van were on illegal duty.

Eke told Vanguard that the suspects failed to follow the due process before escorting bank bullion van, even as it was said that they did not fire a single bullet when the robbers waylaid them.

It was learnt that the policemen fled the scene of the robbery immediately the robbers double-crossed them and fired volleys of gunshots.

Their desperate bid to make quick money for the weekend that fateful day may not only cause them their jobs but send them behind bars. It was gathered that the mobile policemen deployed to the scene of the robbery fished out the suspects while combing the bushes in the village where they fled to.

The bullion van and the escort vehicle were riddled with bullets, while their tyres were deflated by gun shots fired by the robbers.

Speaking to Vanguard, some of the villagers said the robbers were trailing the bullion van from Ondo town until it got to the village where some speed breakers were made before attacking the van and the escort police vehicle.

According to one of the villagers who pleaded anonymity, “a red car pretended to overtake the bullion van while it slowed down because of the speed breakers, only to double cross it and fired volleys of gun shot into the air and on the two vehicles.”
Posted by femmyoju at 11:40