My dad forced me to become suicide bomber —Girl Confesses 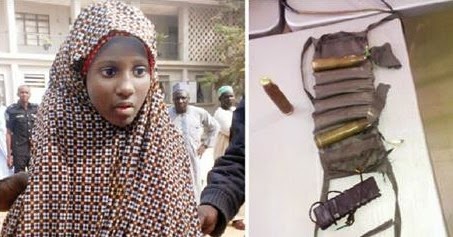 The 13-year-old girl who was caught in suicide bomber mission, Zahra'u Babban Gida, has narrated how her own father forced her on a suicide bombing mission to spoil this Christmas in Kano State.

The teenage girl, who was paraded by Kano Police command and the Department of State Services in Kano on Wednesday, said: “My mother and I were taken to Boko Haram members in the bush by my biological father, whom I believe has been a member, though not to my knowledge. And since then, we have remained under the custody of Boko Haram.”

“It was days ago that they called on me and asked me whether I should do (Istishadiyya), that is, commit suicide for the sake of getting reward in the hereafter. I told them I wouldn’t but they threatened to shoot me if I failed to abide by their request of wearing explosives to kill people.

“Afterwards I accepted to wear the explosives, among other two female colleagues. We left Baluchi and arrived in Kano on December 10. Our guide engaged in a series of phone call before we arrived in Kano and we found a tricycle waiting for us. He picked the three of us to Kwari market where the mission was to be accomplished,” she narrated.

According to her, though they lived in Kano at Dawanau area before her father took them to Baluchi State, their hometown was in Damaturu, Yobe State.

Zahrau said that there were armed men of different racial backgrounds in the bush, which was surrounded by armed men.

Zahrau added that, together, they had planned to detonate their explosives at different points, but she couldn’t detonate hers because the first explosion affected her as she sustained injuries.

As a result of the injury, Zahrau said: “I ran into the streets and stopped a commercial tricyclist who took me to Dawanau area where I lived with my parents in the past. I met only women in the area because their husbands were not at home. Later a passerby advised us to go to hospital. We heeded his advice and went to hospital. I was receiving treatment when the tricycle driver found my explosives vest, which I had dropped in his tricycle, and brought it to the hospital, claiming it was mine.”

At that point, she said, the soldiers took her away.
Posted by femmyoju at 10:52