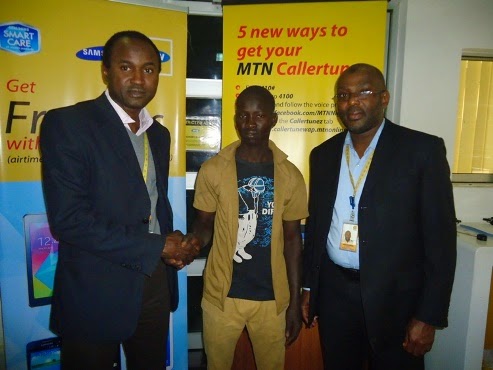 It seems MTN giveaways never end. The telecommunications and ICT Company has been putting smiles on the faces of Nigerians by rewarding those who just subscribed to its network with N1m daily in a promo tagged Cash Quest. In common local term, this is most likely an ‘Awoof’ as Sadiyah Muhammed from Bauchi, Isa Mohammed from Kano and many others have benefitted from MTN’s largesse. (Pic above: MTN’s Customer Relationship Manager, Kano, Kabiru Kazaure (left) and MTN’s Regional Trade Marketing Manager,North West Region, Abdulhamid Hassan ( right), congratulating Muhammad Isah (centre), a one million naira winner in the on-going MTN Cash Quest Promo.)


Meanwhile, it doesn’t end there. Many more people are still going to win provided they purchase an MTN line and activate it before New Year. It’s yummy, yummy, all the way to 2015. MTN Cash Quest sums up a year of exciting gifting by the largest telecommunications company in Africa. A month earlier, it was the ‘Surprise’ Campaign. Everyone – parents, workers, commuters, students, even lecturers – received one surprise gift or the other from MTN.

At some point, free Y’ello buses were conveying commuters from bus-stops to bus-stops in Lagos. Students in schools received surprise visits by popular artistes and MTN ambassadors as well as loads of free data. Market men and women across the nation were not left out. The Cash Quest Promo runs from now till March but new MTN subscribers will continue to receive free gifts and cash rewards till December 31st so long they activate their lines before then.
Posted by femmyoju at 21:14