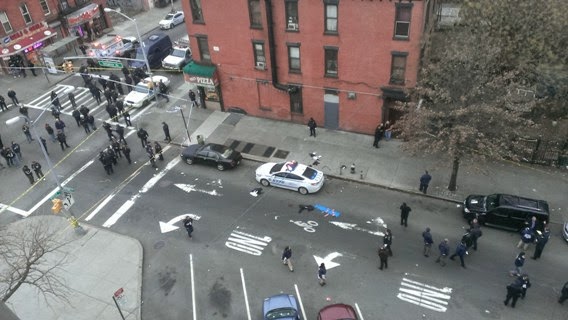 I was hoping a day like this will never come, when citizens will take laws into their hands and start shooting police officers because of what their colleagues did to Mike Brown and 'I can't breath', Eric Garner, but it looks like the day has finally come.

Two uniformed NYPD police officers were shot dead execution style today September 20th while they sat in their police car on a Brooklyn street corner and investigators believe they were killed to avenge Eric Garner and Michael Brown because of what the killer wrote on instagram hours before committing the murders. Scene of the shooting above. Continue... 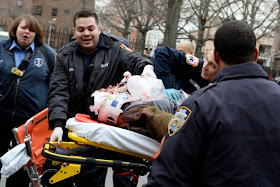 From NY Post
“It’s an execution,” one law enforcement source said of the 3 p.m. shooting of the two officers, whose names were being withheld pending family notification of their deaths. 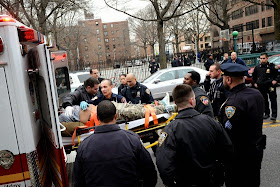 The tragic heroes were working overtime as part of an anti-terrorism drill when they were shot point-blank in their heads by the lone gunman, who approached them on foot from the sidewalk at the corner of Myrtle and Tompkins avenues in Bed-Stuy.

"I’m Putting Wings on Pigs Today,” a person believed to be the gunman wrote on Instagram in a message posted just three hours before the officers were shot through their front passenger window.

The post included an image of silver automatic handgun with a wooden handle. Another post showed camouflage pants and blue sneakers which matched the clothing the dead gunman was wearing as his body was carried from the scene on a stretcher. 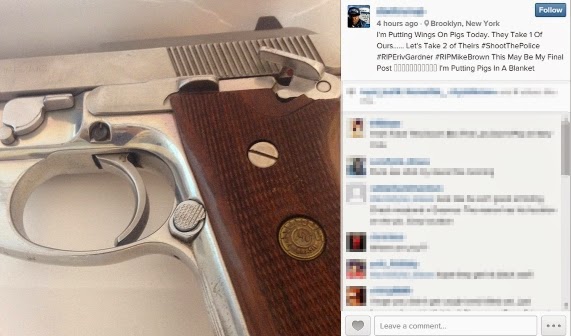 “They Take 1 Of Ours … Let’s Take 2 of Theirs,” the post continued, signing off with, “This May Be My Final Post.”

The gunman was a fugitive who had just murdered his girlfriend in Baltimore Saturday morning, sources told The Post.

Minutes after shooting the two officers, he, too, was dead.

He fled to a nearby subway station, the G-train station at Myrtle and Willoughby avenues, where, as pursuing cops closed in, he shot himself on a crowded platform, sources told The Post. 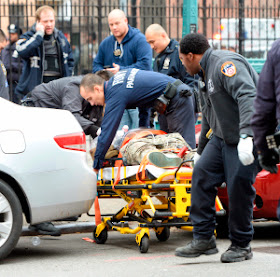 “They engaged the guy and he did himself,” one investigator said of the gunman’s demise.
Both shooting scenes — above and below ground — were scenes of blood and terror.

"I heard shooting, — four or five shots,” ear-witness Derrick McKie, 49, told The Post of the cops’ tragic murder. “It sounded like from a single gun,” he said. Ambulances and police cars rushed to the scene, he said.
“I seen them putting the cop in the ambulance. He looked messed up,” McKie, a barber, added. “He took a high caliber weapon to the face. He was lifeless…I couldn’t see where the holes was that, all I could see was blood. His body was lifeless.”

Modal Trigg Carmen Jimenez, 32, a social worker from Bedford-Stuyvesant, was on the subway platform when the gunman ran inside, pursued by officers.
“Everything happened so quick,” said Jimenez, who is eight months pregnant. “We were standing waiting for the G train. We heard arguing from the other end of the platform.