Over 10 soldiers died during the Ashaka, Gombe state terror attack-DHQ 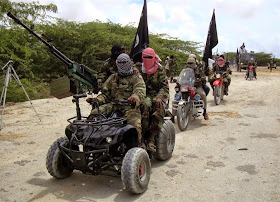 The Defence Headquarters says over 10 soldiers lost their lives during the Boko Haram attack at Ashaka town in Gombe state on Thursday December 4th.

In a statement released yesterday, the Defence headquarters said many Boko Haram members were also killed. Find the statement as posted on their website below

Terrorists fleeing Ashaka on Thursday managed to retrieve 3 truckloads full of their dead members following the defeat & heavy casualty they suffered after a fierce battle with troops in the area. The terrorists who had come in large number with heavy equipment & convoy of over 30 vehicles & a number of motor cycles, were on a mission to take control of Ashaka town, after they had operated in Bajoga & environ in Gombe state.

Troops who got wind of their intention to overun other towns pursued the terrorists while some also laid ambush for them. The terrorists were forced to abandon the mission when the troops proved unyielding. Most of the vehicles & equipment used by the terrorists for their mission, were destroyed before they chose to flee the location. Over 10 soldiers however died in the battle while those who were wounded are being treated in military hospitals.