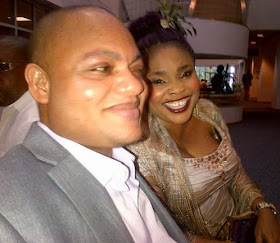 Ladies, if you are taken by a man who is comfortable, don't take things for granted as there are other girls out there who are interested in your man, sometimes even ladies close to you. You never know!

This is the bitter lesson that actress Lola Alao is now grappling with. She secretly tied the knot last August to an American based Nigerian, Olawale Ajibola, at a civil ceremony in Atlanta. In fact, she even gushed about how happy she was with her new hubby in a recent intervie.

But just months after their wedding, things have fallen apart. According to those who know, Lola’s hubby has left her for another lady and not just any woman but one of the actress' best friend. Check out a photo of Lola's rich husband with her best friend, Beckey, below: 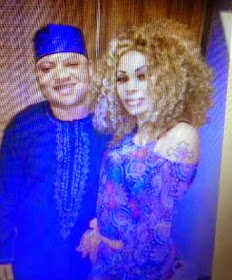 The actress and her husband, Wale, are based in the United States, while Lola’s BFF, Becky, is based in Canada with her own hubby.

According to SDK‘s sources, Lola is/was close friends with Becky, the woman that allegedly stole her hubby. Becky is married to a man named Kola. According to people in the know, Lola married Wale at a point when he was at his lowest. They were brought together by a friend when he was “inside” and Lola supported him and gave him the love he needed, because of his “peculiar situation”.

So Lola & Wale are married, then comes Becky, who always referred to Lola’s husband as her “uncle”. By virtue of that she and Lola become very close, besties, almost like sisters.

S**t hit the fan for all parties involved when Becky called the cops on her hubby (Kola) after an alleged domestic dispute at their home in Canada. He was allegedly arrested and bailed out by his close friends. It is alleged that when Becky’s husband was in jail & waiting to be bailed out, was when Becky & Wale decided to go make their long distance affair legit.

Wale was previously based in the States, but it’s alleged that he is now in Canada with the new love of his life…Becky…who is Lola’s BFF….sorry former BFF. Wale & Becky are allegedly attending events together in Canada and are allegedly not hiding their relationship.

It is being alleged by insiders that Lola Alao did not see this coming and she is not only embarrassed but in complete shock!
Posted by femmyoju at 17:42