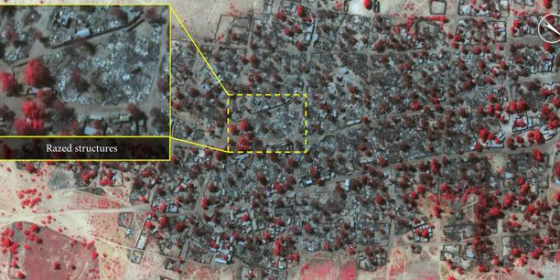 Amnesty International has released satellite images from the January 2nd and 7th Boko Haram attack in Baga Borno state. Early reports put the death toll from the attack at 2000 but that has been disputed by the Nigerian military who put the death toll at 150.

According to a report carried out by AI's Nigeria researcher, Daniel Eyre, about 3,700 homes in two villages, Baga and Doron Baga were destroyed by the militants. The report claims that of all the Boko Haram attacks, the one carried out in Baga last week is so far the deadliest. Continue...

“The Satellite images released by Amnesty International on Wednesday provides indisputable and shocking evidence of the scale of last week’s attack on the towns of Baga and Doron Baga by Boko Haram militants. Before and after images of two neighbouring towns, Baga (160 kilometres from Maiduguri) and Doron Baga (also known as Doro Gowon, 2.5 km from Baga), taken on 2 and 7 January show the devastating effect of the attacks which left over 3,700 structures damaged or completely destroyed. Other nearby towns and villages were also attacked over this period. These detailed images show devastation of catastrophic proportions in two towns, one of which was almost wiped off the map in the space of four days. Of all Boko Haram assaults analyzed by Amnesty International, this is the largest and most destructive yet. It represents a deliberate attack on civilians whose homes, clinics and schools are now burnt out ruins. The analysis shows just two of the many towns and villages that fell victim to a series of Boko Haram attacks which began on 3 January 2015. In Baga, a densely populated town less than two square kilometres in size, approximately 620 structures were damaged or completely destroyed by fire. In Doron Baga over 3,100 structures were damaged or destroyed by fire affecting most of the four square kilometre town. Many of the wooden fishing boats along the shoreline, visible in the images taken on the 2 January, are no longer present in the 7 January images tallying with eye witnesses’ testimony that desperate residents fled by boat across Lake Chad. Thousands of people have fled the violence across the border to Chad and to other parts of Nigeria including Maiduguri, the capital of Borno State. These people are adding to the hundreds of thousands of internally displaced people and refugees, who have already stretched the capacity of host communities and government authorities" the report said

The report included accounts of some villagers who gave accounts about the attack. One man who was interviewed said he saw a woman who was in labor attacked and killed with her unborn child ripped from her stomach

Another said “They killed so many people. I saw maybe around 100 killed at that time in Baga. I ran to the bush. As we were running, they were shooting and killing.”he said

Amnesty International called on the Nigerian government to take all possible legal steps to restore security in the north-east and ensure protections of civilians.

“Up until now, the isolation of the Baga combined with the fact that Boko Haram remains in control of the area has meant that it has been very difficult to verify what happened there. Residents have not been able to return to bury the dead, let alone count their number. But through these satellite images combined with graphic testimonies a picture of what is likely to be Boko Haram’s deadliest attack ever is becoming clearer. This week, Nigeria’s Director of Defence Information stated that the number of people killed in Baga including Boko Haram fighters “has so far not exceeded about 150.  These images, together with the stories of those who survived the attack, suggest that the final death toll could be much higher than this figure.” the report says