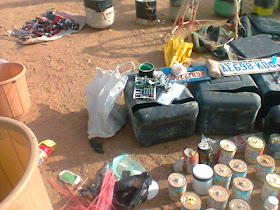 A man suspected of being behind the manufacture of explosives used in a series of Boko Haram suicide attacks in Nigeria has been arrested in northeast Nigeria, a senior police officer has told AFP.

The man, identified only as Ba’na, was held in the Arikime area of Potiskum, in Yobe State after several weeks of surveillance‎.
Posted by femmyoju at 18:31