Breaking! Damaturu In Yobe State Is Presently Under Attack 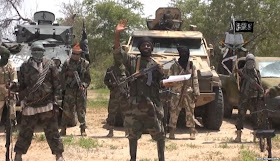 I Know one day God will save Nigeria from Shekau and his men. Most of us who do not live in the North really have little or no understanding of what is actually going on there. It’s like a war in some places, really really sad. These people have no place to go; it’s their town, their father’s town! Where they lived and grew. Why then will intruders just want them to leave where they only know, what they have laboured for all their lives for them to just take over. It’s really sad, just sad.

Damaturu in Yobe State is presently under attack as you read this. The attack started around 8pm this night. Just barbaric! Wicked!! Premium Times have a scoop on what is presently going on right now. Read it after the cut.

Damaturu, the Yobe state capital has again come under intense assault by suspected Boko Haram militants, barely a month after a similar attack killed many residents.

Residents and security operatives said the city is currently under heavy gunfire and multiple explosions forcing people to cringe in their homes.

Umar Haruna, a civil servant residing in Damaturu told Premium Times that the city and its residents have come under attack again.

He said the attack started at about 8p.m.

“We are under attack; gun shooting everywhere in Damaturu…we dont know what to do now,” he said.

A top security officer of the State Security Service, SSS, who refused to be because he was not authorised to speak, told our correspondent via SMS that “Yes, there is an attack going on here and I believe the soldiers and the police are containing the attacks.”

The attack is the second in the last two months on Damaturu.

The insurgents had launched a heavy attack on the capital on December 1, targeting the government house.

The attack was successfully repelled by the Nigerian security forces
Posted by femmyoju at 22:53