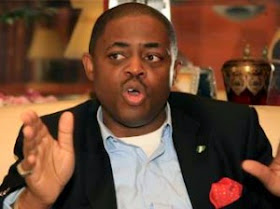 The spokesperson for President Goodluck Jonathan’s campaign organisation, Mr Femi Fani-Kayode has denied the allegation that he manipulated a document from Cambridge University to justify his claim that General Muhammadu Buhari’s West African School Certificate’s statement of result was forged.

FFK has decided to address the situation by releasing a press statement through his Special Assistant, Sufuyan Ojeifo.  Read the full statement below.
Buhari Certificate Saga: Allegation of document manipulation against Chief Femi Fani-Kayode is indicative of desperation by the opposition

The attention of the Director of Media and Publicity of the PDP Presidential Campaign Organisation, Chief Femi Fani-Kayode, has been drawn to some media reports alleging that he manipulated a document from Cambridge University to justify his claim that that General Muhammadu Buhari’s West African School Certificate’s statement of result was forged.

Chief Fani-Kayode wishes to state clearly that he never issued a statement signed by him in his capacity as spokesperson of the PDP Presidential Campaign neither did he address a press conference nor briefing where he referred to the Cambridge document in question.  He also did not validate the content of the said document on any occasion.

As far as he is concerned, he, as a person, does not know of the existence of the said Cambridge e-mail document and what the content is all about. He never commented on the content of the document and therefore how that translated into forgery beats the imagination.  To be clear, he has not been in touch with Cambridge to request for any information in respect of the issue in question.

For the record, it is important to state that the media report on which the allegation of manipulation against Chief Femi Fani-Kayode was grounded happens to be the THISDAY news report of Monday, January 26, 2015 with the headline “Certificate Saga: Hausa Language Was Not Offered in 1961, says Report”.

The news report was apparently muddled up in its facts and presentation in paragraph 13 wherein it said that Chief Fani-Kayode “CLAIMED that he came across an e-mail dated Thursday, January, 2015 from the institution’s (Cambridge) Archives Delivery Service Officer, Jacky Emerson, to one Sodiq Alabi who requested confirmation if the examination body offered Hausa Language in the 1961 West African Examination it organized.”

It is hereby categorically stated that there is no such press statement anywhere in the whole wide world signed by Chief Fani-Kayode wherein he made any such claim.

The other references to Chief Fani-Kayode in the THISDAY news report were a recall or tie-back of all that he said at his press conference in Abuja last Thursday on the forged statement of result purported to be General Buhari’s.

The allegation of manipulation against Chief Fani-Kayode is, therefore, indicative of desperation by the opposition who should have spoken to the issue of whether or not General Buhari has a certificate or not.
Posted by femmyoju at 18:36