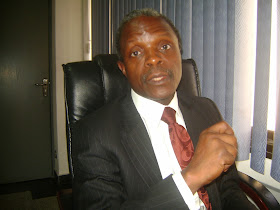 APC’s Muhammadu Buhari's running mate, Yemi Osinbajo who also doubles as a pastor in the Redeemed Christian Church Of God, has said he consulted the General Overseer of the church, Pastor E.A Adeboye, before embarking on this journey, Mr Osinbajo who spoke to Kayode Falade said.

The Redeemed Christian Church of God, where you are a pastor, has come out to say it never endorsed you…

But did you seek Pastor Adeboye’s consent before accepting the nomination?

Did he give you his consent?

I have consulted with Adeboye fully. I am not prepared to share with you the details of our discussion. But be absolutely certain that I would not take these steps without properly consulting with him and that I did what was needful.
Posted by femmyoju at 09:12