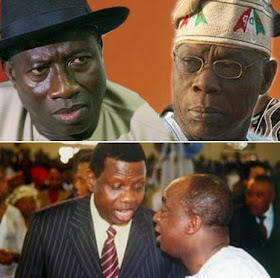 It was more like a hide and seek game! That aptly captures the processes that led to the closed-door meeting between President Goodluck Jonathan and ex-President Olusegun Obasanjo in his residence in Abeokuta, the Ogun State capital, on Monday.

Desperately seeking Obasanjo’s support for his re-election bid, President Jonathan finally met with him last night at his Hilltop mansion.

At the meeting, according to inside sources, were two major Christian leaders – General Overseer of the Redeemed Christian Church of God, Pastor Enoch Adeboye and Winners Chapel’s Bishop David Oyedepo.
pesident Jonathan apologized to Obasanjo seriously, especially for all the negative things people like Doyin Okupe and others had said about him in the past.

The powerful meeting, which started at about 9pm went of for about one hour before the President and others drove out of Obasanjo’s residence in a convoy of nine cars.

It was learnt that the church leaders attended the meeting at Obasanjo’s instance. He, according to sources, insisted when Jonathan proposed the meeting that the religious leaders must witness the discussion.

Former President Obasanjo, it was gathered, said Jonathan did not honour agreements from their previous meetings, hence the need for such high profile witnesses.

Other leaders of the Peoples Democratic Party (PDP), including National Chairman Adamu Mu’azu and former PDP chairman Senator Ahmadu Ali, were also believed to have attended the meeting.

Attempts by Jonathan to woo the ex-President, who is his political godfather, included a meeting last month with Obasanjo by some PDP governors led by Akwa Ibom State Governor Godswill Akpabio.

Although neither Jonathan, who passed the night in Abeokuta, to enable him continue his campaign in the Southwest today – in Osogbo and Ado Ekiti – and tomorrow in Akure – nor Chief Obasanjo, was available to speak to anxious reporters after the meeting, sources said Obasanjo planned to use the talk as an avenue to ask the president some salient questions, most of which he had publicly raised, before the religious leaders.

These included the security of the country, the weeding out of his loyalists from their positions in the PDP, the matter concerning the South-West organising and mobilisation committee head of PDP, Mr. Buruji Kashamu, who the former president said he could not accept as his leader, among others.
Posted by femmyoju at 00:18