Jonathan vows to crack down on troublemakers in 2015 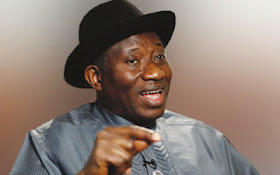 President Goodluck Jonathan has vowed to deal decisively with anyone who may decide to foment trouble before, during and after the 2015 general elections.

He said he would wield the big stick against troublemakers because of the post-2011 elections violence that erupted in some parts of the country.

The President added, “My commitment to free elections and one man, one vote remains unwavering. Our administration has worked hard in previous elections to prepare all key stakeholders including the Independent National Electoral Commission, security agencies and the electorate optimally, to ensure a progressively improved electoral process in the country under my watch. We will continue to do so for the coming elections.

“We will continue to provide adequate funding to INEC and maintain the commission’s independence and isolate it from any form of interference or meddling in its day-to-day affairs. This shall continue to guarantee its impartiality and ability to conduct more credible and acceptable elections.

“The national security agencies will also be given all necessary support to enhance their ability to ensure that the elections are peaceful and violence-free...

“Let us not promote sectionalism, disunity, intolerance, hate, falsehood or the malicious abuse of political opponents. Whatever we feel or seek, we must have a nation and a people before we can dream of political ambitions. Let us put the nation and the people first.

“Let us all conduct our electoral campaigns with the highest possible decorum and civility towards political opponents. Let us give INEC the fullest possible support and cooperation it requires to conduct credible and violence-free elections in 2015,” he said.

“As I have always maintained, none of the challenges before us is insurmountable. We must come together as a people and work with single-minded unity of purpose to overcome them.

“As we go into this New Year, I salute the indomitable and resilient spirit of our people in Nigeria and wherever they are in the world. Our spirit of enterprise and the doggedness to succeed amongst all odds has been our strength.”

The President praised the gallant officers, men and women of the Armed Forces and other security agencies who have been in the forefront of the war against terrorism and violent extremism in Nigeria.

Jonathan read the Riot Act in his New Year message broadcast on January 1, 2015.
Posted by femmyoju at 17:39