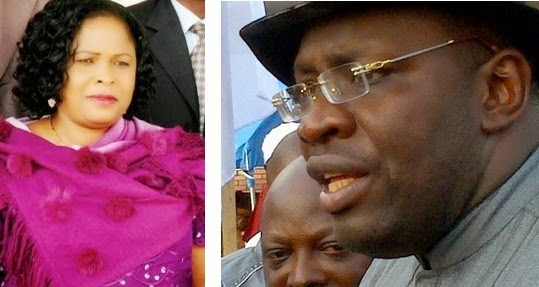 There is trouble in Bayelsa. The State Governor, Seriake Dickson, has sacked the Commissioner for Local Government Administration, Marie Ebikake, and his SA on Special Projects, Remmy Kuku.

The ladies, Ebikake and Kuku, it was learnt, were allegedly fired because of their closeness to the wife of President Goodluck Jonathan, Patience.

There has been no love lost between Dickson and Patience over the latter’s alleged interference in the affairs of the state and plan to hijack the structure of the Peoples Democratic Party from the governor.

The sack of the two aides, which is with immediate effect, is contained in a special announcement on Monday by the Chief Press Secretary to the Governor, Daniel Iworiso-Markson.

Governor Dickson had in March 2014 sacked seven commissioners in a major cabinet shake-up since his administration came on board in February 2012.

Those affected then were mostly people that could be traced to Patience Jonathan.

It will be recalled that it was during that exercise that Ebikake, who has now been removed, was redeployed from the Ministry of Transport to Local Government Administration.

The statement said the governor’s action was in line with his policy of re-organising the machinery of state to deliver on Dickson’s restoration agenda.
Posted by femmyoju at 08:01