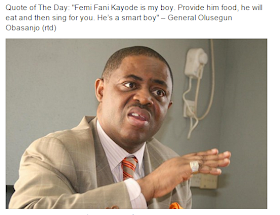 Just got this press statement below. Obasanjo says he didn't make the derogatory remark above about FFK

Former President, Chief Olusegun Obasanjo has refuted reports claiming he abused his former Special Adviser on Public Affairs, Chief Femi Fani-Kayode, contrary to a report presently circulating on numerous online platforms. Obasanjo, while reacting to the said report which went viral on social media today, said the statement credited to him, was figment of someone's imagination who might be bitter about Fani-Kayode's recent assignment.

The Ota, Ogun State-based former number one citizen, under whom Chief Fani-Kayode served as Minister of Culture and Tourism, and later Minister of Aviation, denied the reports, affirming that despite their different political affiliations in the run-up to the February 2015 general elections, he shares special relationship with the Chief Fani-Kayode, who has been appointed as Director, Media and Publicity of Goodluck Jonathan Re-election Campaign Committee. Chief Obasanjo reiterated the father-son relationship between him and Fani-Kayode, who has pitched his tent with President Jonathan of whom his former boss, Obasanjo has been critical. Signed