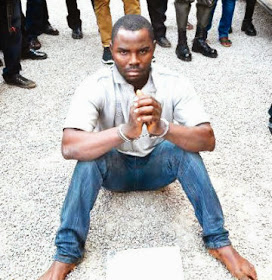 The police in Abuja have arrested a suspected kidnapper, Bola Adesina, who allegedly abducted a five-year-old boy from the Sagamu area of Ogun State.

Punch Metro learnt that 31-year-old Adesina was arrested by detectives attached to the Utako Police Division on Christmas Eve of 2014.

It was also learnt that the victim, identified simply as Ahmed, had been missing from home for about a week.

Our correspondent gathered that the suspect was nabbed at a motor park in the Utako area, while the victim was rescued from him.

Adesina was reportedly heading for a location in Kaduna State to deliver the victim before he was arrested by the police at the park.

The Federal Capital Territory Commissioner of Police, Wilson Inalegwu, said Ahmed had been reunited with his family in Ogun State.

He said, “The suspect will be arraigned in court as soon as sitting resumes. Meanwhile, the child has been reunited with his parents.
Posted by femmyoju at 11:06