The BIG Difference between Jonathan and Buhari 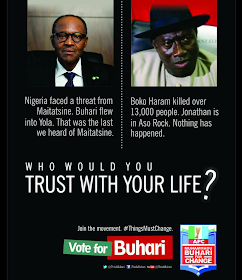 Written by Barrister Festus Keyamo
"Do not forget that I am from the Niger-Delta region and all my close friends and associates are the main supporters and aides of Mr. President. Two or three Governors who are either my former classmates or colleagues are the main backers of Mr. President. It is so easy, so convenient and so seemingly logical for me to get into that political mix and forget about the good of my country for personal gains.

The disgusting message we hear all over the streets of that region every day at this time - promoted by the hirelings of the President – is that Goodluck Jonathan is “our son”, so we have no choice but to support him. In fact, I see some of my “brothers” from the Niger Delta region these days strutting all over the place, denigrating people from other regions. It is typical of what the Yorubas call “omo oju ori ola ri” (a person whose eyes have not seen wealth before).

Kindly note that in getting down from the fence and speaking up at this critical time, I do not mind if you speak up for Goodluck Jonathan. Yes, you have a right to do so as a Nigerian. But, as an elite, your stand must be known so that when the massacres continue because of cluelessness, when the unrestrained stealing of our public resources continue, when darkness continues to befall the nation because of lack of power, it is important we all remember those who betrayed their conscience and the people because of ethnicity and self-aggrandisement and for posterity to record it as such.

We have a President who has no single appetite to fight corruption – yes, none. Imagine a campaign that is dominated by the theme of corruption, yet the President has decided to appoint a person facing trial for money-laundering as his Director of Media and Publicity. If nobody would say it, I will say it because I am the one prosecuting the fellow in court and the case has been adjourned to February 23 and 24 for trial. Part of the lies told is that the fellow has been freed whereas some of the counts in the Charge were just struck out and the court held that he has a case to answer on some other counts. Yet nobody is asking the President these hard questions."

"The clear alternative to this monumental mess is the person of General Muhammadu Buhari. Let us be clear that Buhari does not present the total package Nigerians want at this time. He is human, he is not perfect. But at this point in our history, at this time, at this moment, he presents the only viable option and avenue for the people to vent their frustrations and anger against an inept and clueless Federal Government. He represents the rallying point for the frustrated and teeming masses of our people. He reminds me of MKO Abiola (with some of his imperfections) who became the rallying point in the struggle against military rule.

That is the change we are talking about. It is not a change from imperfection to perfection. It is a change from hopelessness and cluelessness to some hope and to some expectations."