The execution that sickened even ISIS: Woman accused of adultery shot by Al Qaeda in Syria 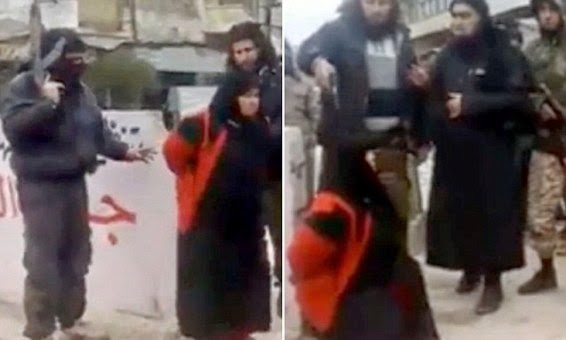 Shocking video has emerged showing a veiled woman being publicly executed by Al Qaeda for alleged adultery - a sentence that has sickened even the Islamic State. The footage shows the woman, who is wearing a black robe and a hijab (headscarf), being ordered to crouch down on the pavement in front of a crowd of masked jihadi fighters in Syria.

Behind her, a militant declares that she has been convicted by an Islamic court of being an adulterer, condemning her for allegedly running a brothel.

A gunmen then pulls out a pistol and shoots her in the head with a single shot as chants of Allahu Akbar - Arabic for God is greatest - ring out from the baying mob. 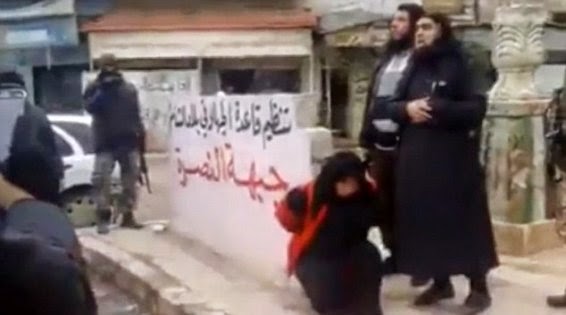 The video, which was posted on social media, has drawn condemnation even from rival Islamists, with one ISIS supporter asking 'which Sharia (Islamic law) is that???'.

The footage, which has not been independently verified, appears to have been filmed by a jihadi fighter on a mobile phone, reportedly from Ma'arrat al-Numan in the north-western city of Idlib.

In the video, a small crowd of masked fighters from Jabhat al-Nusra - an Al Qaeda affiliated group in Syria - gather near the city's main roundabout.

Most of the men are carrying machine guns and are dressed in thick coats and military fatigues.
The cameraman turns the camera to show the emptiness of the roads, with the traffic halted to allow the execution to be carried out in full public view.

A woman, who activists have suggested is thought to be around 50 years old, is shown standing next to several fighters.

Except for a red cardigan, the lady is seen wearing an all-black robe, covering down to her feet.
She also wears a black hijab (headscarf) which tightly covers all her hair.
Nearby a concrete wall, tagged in graffiti declares the area to be the stronghold of Jabhat al- Nusra (the Nusra Front).

A bearded fighter, wearing body armour stands intimidating behind her, warding off anyone uninvited who gets too close to the woman.

Culled from Daily Mail
Posted by femmyoju at 18:25