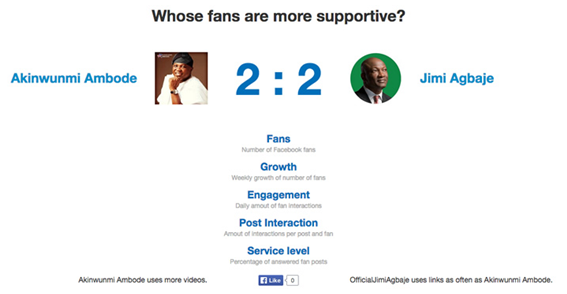 Sponsored post.
Is Social Media ripe enough to predict the Winner of the upcoming Elections in Lagos?

Over 67 million Nigerians are actively connected online. More than half ofthis online population comes from Lagos.  We can also estimate that less than half of these Internet population in Lagos are eligible voters within the age range 18 – 35 years.

Away from the audience analysis, if there is any one city or state in Nigeria where Social/DigitalMedia will play a vital role in deciding the people’s choice for the upcoming elections or could serve as an indicator as to who will win the race based on people’s interest online of the two candidates; It’s Lagos!

Let’s start with Search on Google (no1 most visited site in Nigeria); which of the candidates has spurred Lagosians interest to wanting to know more about them in the last 90 days? 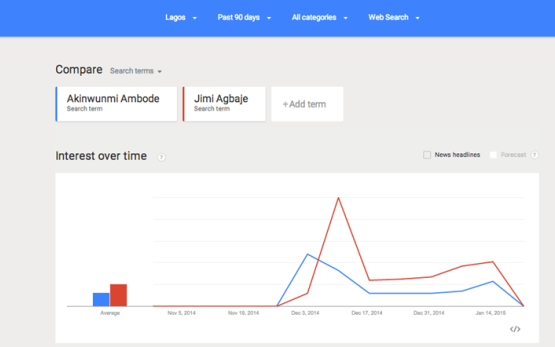 The search interest and trend here shows who has the highest search queries or interests in Lagos in the last 90 days.  However search interest between 18th  -20th of January has dropped for both candidates, we look forward to what the final results will be at the end of the month and one week to Elections.

It is also very interesting to note that in the last 3 months, the search interest for these two candidates is higher than the search volume and interest for the most loved and competitive beverages in Nigeria; Coca-Cola and Pepsi as seen here; 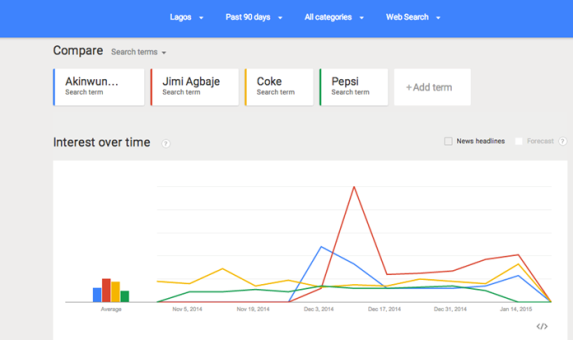 Lagosians do not live by bread alone, they are concerned and passionate about the future of their government.

Both Candidates appear to be doing well on Facebook (the 3rd most visited site in Nigeria); this is a unique platform, as you cannot judge who’s the better leader here by  just a mere look at the number of fans they have but by the actions, engagement and interactions generated from these fans.
A positive action from a fan can influence friends who belong in their social graph to take similar actions. And whatever generates conversation online, automatically has found its way into people’s gists offline. 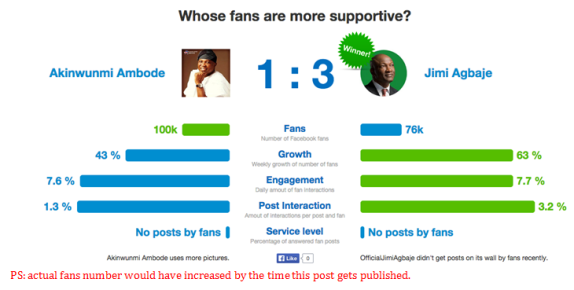 Look through the summary on each parameter above to see who’s doing better.


However, both candidates need to do better with their Reach on this platform. Facebook has between 10 - 15 million monthly active users in Nigeria with more than 70% of this user base coming from Lagos. The more users the candidates can reach, the more chances of them getting their messages across and engaging with these audience.
What’s more important is the opportunity for the candidates to connect with their audience on a personal and emotional level leveraging the power of this social networking site to galvanize the right emotions and actions from their respective audience.

Getting people to take action online follow some specific and basic rules of engagement;
First is what we like to call the SIIT FM (Something in it For ME); what do you stand for; your social identity and what do you have to offer; why should people follow you? The Second is LOVE; are you able to connect with your audience such that you elicit the emotions of love, passion, anger and strong resolve in them. The third is FAME; are you human enough to make your audience look famous interacting with you online and in person? Any of the two candidates who is able to carry their audience on one or all of these engagement paths is set to be the most influential.

Ambode Akinwunmi  (in Orange), Jimi Agbaje (in Blue). What’s clear is that both candidate need to reach more audience and get people to enlist on their campaigns. However, you will be able to tell from the stats below which candidate has the highest rank (the lower the number, the higher the rank), which has the most visits, time on site, page views etc.

Results for twitter;
The traffic sources here shows the channels through which visits to the candidates website come from.

Highlights for twitter (the 7th most visited site in Nigeria) includes the share of voice, top phrases used and sentiments; available in the full report.

This report is independent of any political party. Also this report is not definitive of who will win but rather evolving, highlighting audience interest per time within a certain time period.

The population of active Internet users in Lagos is high enough to decide who wins the upcoming Gubernatorial elections. The question is will these Internet population vote?

For detailed analysis visitwww.wildreams.co/digitalfast and subscribe for our newsletter on this special report throughout the Election period.
Posted by femmyoju at 07:39